You know what surprises me the most in regards to data breaches? It’s the fact that people still continue to use passwords like “password” or “123456” to protect their accounts. Think I’m kidding? I’m really not, take a look. Using passwords like these is a big issue because it leads to really, really bad things.

One day you log into your banking account to do some shopping and next thing you see is that you’ve got no money. You’ve had some yesterday though, so how could that happen? The answer is simple – it happened because you have became a victim of identity theft.

When dealing with passwords, two rules should be applied:

By mentioning “strong” passwords I mean that each of your password should consist of at least 20 characters and it should contain uppercase, lowercase letters, numbers and symbols.

Ideally, each of your passwords should look like this: 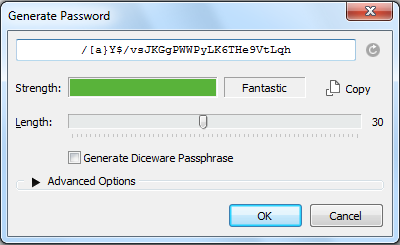 Wait – how on earth can you remember such a password?!

All this comes down to one important conclusion: If you can remember your password, it’s not secure enough.

This question comes up almost every time password managers are mentioned and it’s a very good question to ask: You’re putting all of your eggs in one basket, what if that basket gets compromised?

Here’s the thing: In order to do any damage, a hacker would need to be able to get his hands on the file that contains all of your passwords (most password managers store the password vault locally) and guess your master password. Furthermore, most password managers let you activate two-factor authentication or location-lock your account which means that even if your master password is compromised in some way (such an event shouldn’t happen if you choose one securely) the attacker would be stopped.

I suspect we see such numbers because two-factor authentication is something people have to do in addition to just entering an email and a password: it becomes a barrier. Having said that, this barrier is extremely important – it’s a layer to double check that your identity is legitimate which could save you from getting your identity or money stolen.

Password reuse leads to identity theft: passwords should be single-serve only. Password managers are helpful on this occasion too – they’re able to generate a new password for every service you use which is an extremely good thing because by doing so they almost eliminate the chances of you getting your identity stolen.